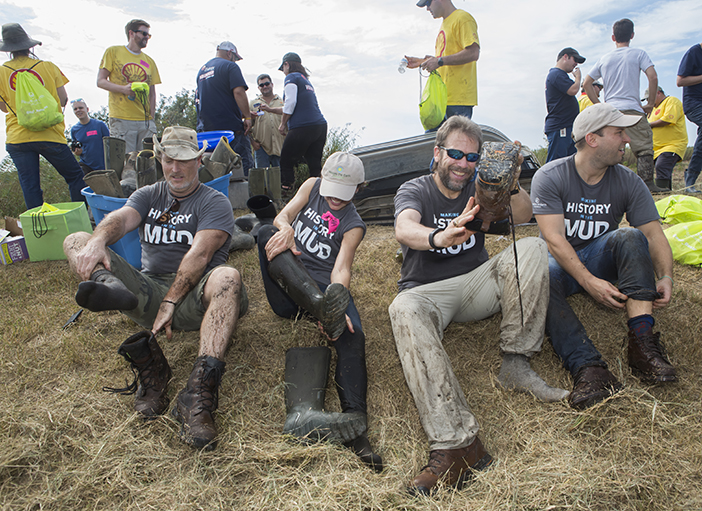 On Thursday, October 27, 2016, over 120 people joined Restore the Earth Foundation to celebrate the groundbreaking of our initiative to restore one million acres in the Mississippi River Basin—a vast ecosystem once so rich in biological and environmental resources that it was compared to the Amazon Rainforest.

In less than two hours, our 50 volunteers and a donated Marsh Master™—a critical piece of marsh restoration equipment, which we nicknamed “Marsh Force One”—planted the first batch of 600 bald cypress trees to begin the restoration of 4,000 acres of historic bald cypress forest in Louisiana’s Pointe-aux-Chenes Wildlife Management Area. 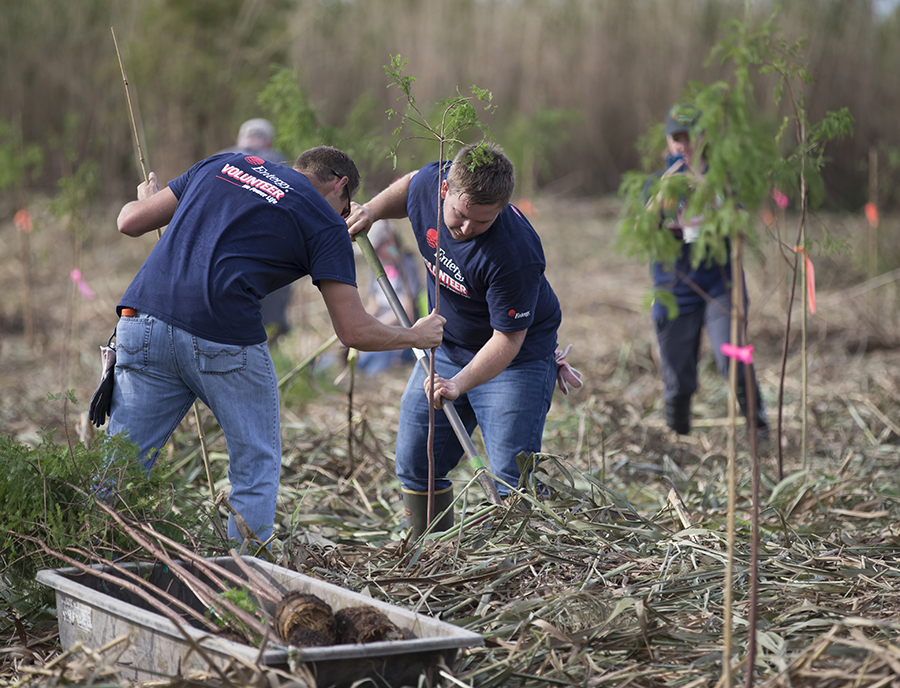 October 27, Restore the Earth and 50 volunteers planted more than 600 bald cypress trees in the Pointe-aux- Chenes Wildlife Management Area. Historically, this 4,000-acre area was a vast, healthy, bald cypress forested swamp. Today, it has become a marsh swamp, with only grasses and low-lying vegetation as the result of storms and human activities.

Ultimately, our plan is to restore one million acres in what we call “North America’s Amazon,” an essential ecosystem that is critical to the protection and resiliency of local communities, our nation’s economy, and the planet. Landscape-scale restoration, like this initiative, goes beyond a patchwork approach and knits together disconnected landscapes, involving a collective of ecological habitats, communities, and land uses. It ensures habitat and communities are enhanced by the restoration, supporting a self-sustaining system over the long term.

Here’s more on what we’re doing, why this work matters, and how can you join us.

Why This Matters Locally: Restoring 4,000 Acres in Pointe-aux-Chenes

For the 200,000 people in Terrebonne and Lafourche parishes, Pointe-aux-Chenes provides the last line of defense against the threat of increasingly harsh storms and floods that have turned others in Louisiana into this country’s first “climate refugees.” The death and destruction caused by the 2016 Louisiana floods underscore the need for real solutions that build community climate resilience and prevent even more dangerous climate impacts in the future.

By replanting trees and restoring wetlands in Pointe-aux-Chenes, Restore the Earth Foundation hopes to repair some of the harm caused by hurricanes and human activities. This area has lost an extreme amount of land, with contiguous sections of wetlands now converted to open water. This is one of the last major land masses separating 200,000 people from the open water and is in dire need of protection and restoration. 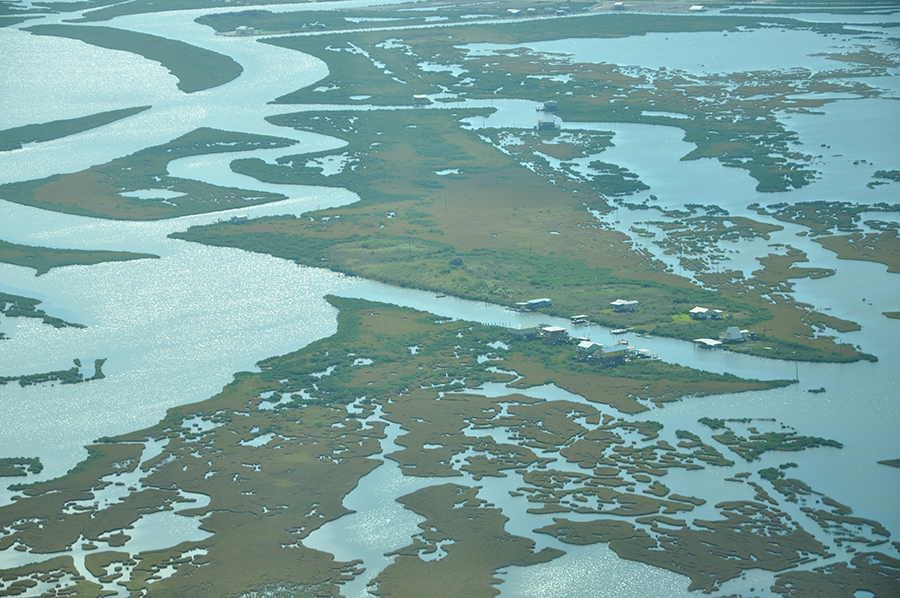 Living on thin fingers of land, the residents of these bayou communities are extremely vulnerable to threats from the Gulf of Mexico. The good news is that land has once again built up over time in some areas. By planting stabilizing vegetation such as bald cypress trees, this restoration project will ensure that newly created land remains intact.

The restoration of 4,000 acres in Pointe-aux-Chenes has the potential to deliver tremendous benefits to the local community, economy, and environment:

At the groundbreaking ceremony, attendees and volunteers represented partners and diverse local groups, including the Louisiana Department of Wildlife and Fisheries, the Terrebonne and Lafourche parish governments, the Pointe-au-Chien Indian Tribe, the Water Institute of the Gulf, Environmental Defense Fund, Ducks Unlimited, and local community members and nonprofits.

Pledging his agency’s “total support” for our restoration initiative, Louisiana Department of Wildlife and Fisheries Secretary Charlie Melancon said that demonstration plantings at Pointe-aux-Chenes are now thriving, which proves the potential for Restore the Earth’s project. “This is a piece of land that they thought was lost a number of years back,” said Melancon, whose agency manages Pointe-aux-Chenes. “It’s being regained. Not only will this accomplish the air-quality goals, but we will also recapture the land. It’s a great challenge.” 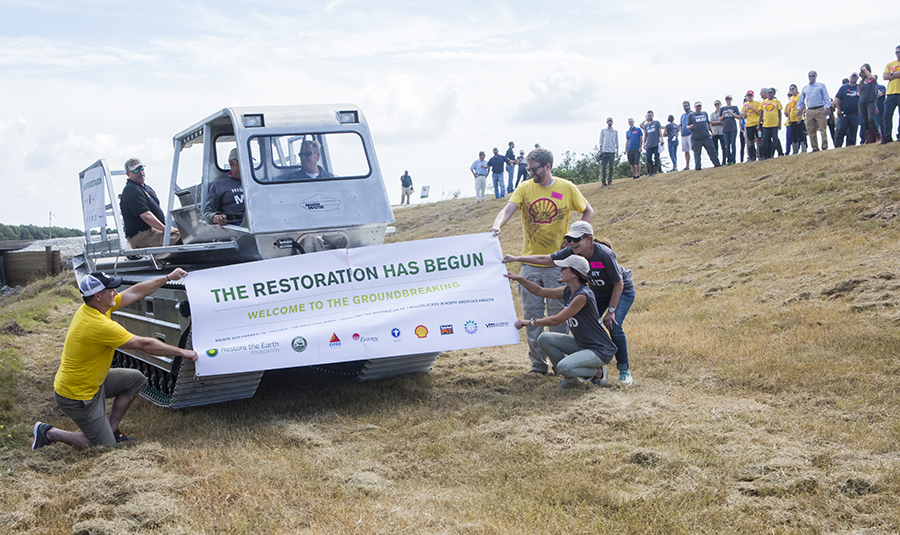 The 7,000-pound Marsh Master—christened Marsh Force One by volunteers and attendees at the Groundbreaking—is a critical tool in the restoration effort, allowing the restoration teams to efficiently prepare land for planting. By the end of 2016, Marsh Force One will help plant more than 20,000 trees across almost 200 acres of Pointe-aux-Chenes.

Why This Matters Globally: Restoring One Million Acres in North America’s Amazon

It is also an economic powerhouse. The Gulf Coast produces 20 percent of the U.S. commercial fishing catch and 30 percent of the seafood consumed in the United States. Louisiana hosts the world’s largest port district, with 500 million tons of shipped goods passing through each year. Millions of people and billions of dollars depend on the benefits it provides, from national and international commerce and transportation, recreation, and tourism, to hurricane defense, clean air, and climate change mitigation.

Unfortunately, human and industrial development has degraded these lands, forests, and coastlines, which are now at even greater risk due to our changing climate. The southernmost part of North America’s Amazon, the lower Mississippi River basin, is the most ecologically degraded area on the continent. Once covered with 24 million acres of forest, only 5 million acres remain today. In Louisiana’s coastal areas, wetlands loss occurs at such a fast rate that an area the size of a football field disappears every hour. In 2016, the dead zone in the Gulf of Mexico reached 6,824 square miles, an area the size of Connecticut.

Our trees are specially grown at a local nursery through our EKOgrown™ methodology, an all-natural process that uses native seeds to produce robust trees with survivability rates between 90 and 95 percent after five years. In contrast, traditional, bare-root seedling growing processes produce trees with a 30 to 40 percent survivability rate over the same time period.

Because of the enormous, daunting nature of the problems, landscape-scale restoration is the only way to rebuild the health and integrity of this critical ecosystem. In addition to saving the ecosystem, restoring one million acres in North America’s Amazon will deliver tremendous benefits by protecting the health, resiliency, and sustainability of local communities and the national economy.

On November 4, just one week after our groundbreaking, the Paris Agreement on climate change became international law. This was a landmark event to celebrate, but, as UN Secretary-General Ban Ki-moon said in commemoration of the milestone: “We are still in a race against time. We need to transition to a low-emissions and climate-resilient future. Now is the time to strengthen global resolve, do what science demands, and seize the opportunity to build a safer, more sustainable world for all.” Many are calling the COP22 international climate talks that began in Morocco this week the “COP of action.”

One of the critical actions we can take now is landscape-scale restoration, which is codified in Article 5.1 of the final Paris Agreement. Every year, 12 million hectares of land worldwide is degraded through human activity. This means an area half the size of the UK is left as waste annually. Restore the Earth Foundation intends to make sure that the world does not write off North America’s Amazon.

Who’s Involved and How Partners Benefit

Through our EcoMetrics™ Model, Restore the Earth quantifies the full financial value of restoration’s environmental, social, and economic impacts, and aligns these with the International Integrated Reporting Council (IIRC)’s Framework. This proprietary model proves that for every $1 invested in landscape-scale restoration, more than $9 in environmental, social, and economic value is created.

In recognition of the diverse value of these benefits, several partners have joined Restore the Earth to support our North America’s Amazon restoration initiative. Our first collaborative venture is with the United States Business Council for Sustainable Development (US BCSD), including members CITGO, Entergy, Shell, and VMware. 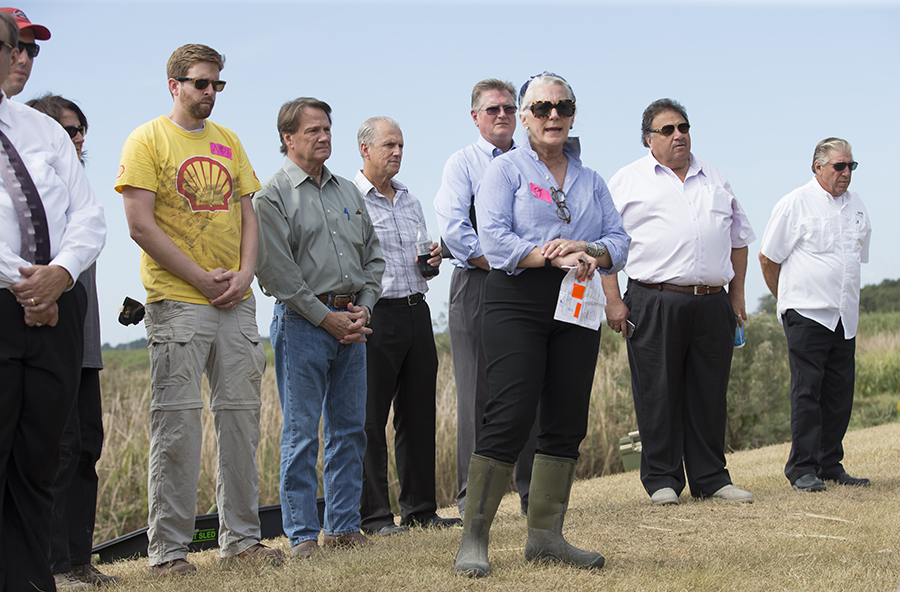 Since 2008, REF has raised $35 million in public and private funding to restore 45,000 acres of degraded wetland and forested ecosystems. Here, REF Co-Founder and Executive Director P.J. Marshall, as well as partners and friends from the public and private sector, opens up the groundbreaking ceremony for our North America’s Amazon restoration initiative.

Our public partners—the Louisiana Department of Wildlife and Fisheries and the Lower Mississippi Joint Venture and its partners, including the U.S. Fish and Wildlife Service—provided in-kind support as well as access to land and scientific expertise.

Here’s what some of our partners are saying about why they support this initiative:

Nicola Acutt, Vice President of Sustainability Strategy, VMware: “We were instantly inspired by the scope of the ‘North America’s Amazon’ project and, more importantly, their holistic approach to value. This is a great example of the kind of boldness we need to tackle climate change, working strategically and at a scale to make a difference.”

What’s Next—and How You Can Support Our Work

The restoration of North America’s Amazon will be one of the world’s greatest environmental comebacks. But we can’t do it alone. Our goal is to trigger a restoration movement, and we are inviting businesses, public agencies, civil society, and other stakeholders to support this initiative through funding, access to land, science and research, and program implementation. Everyone has a role to play in restoring this global treasure.

We hope you join us to make history in the mud.

For more information about how you can support Restore the Earth Foundation’s initiative to restore one million acres in North America’s Amazon, please contact Taylor Marshall at tam@restoretheearth.org.