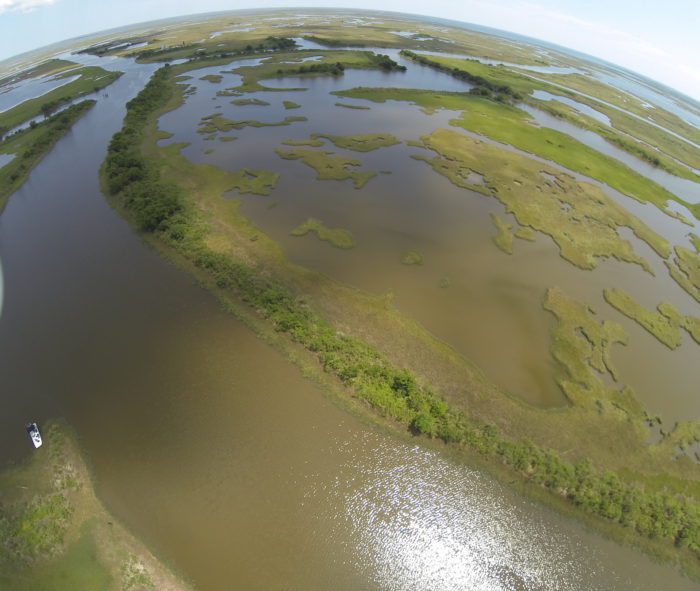 Travel in Pointe aux Chenes, a 35,000-acre swampy marshland southwest of New Orleans, is difficult. The 680 members of the Pointe-au-Chien Tribe who call it home historically used canoes carved from native bald cypress trees – a species often compared in size and majesty to California’s redwood. Today the wetlands’s acreage is more likely to be traversed on motorboat by hunters seeking waterfowl, mink, nutria, muskrat, and Inland saltwater fish species like crabs and shrimp. That is, if they can find them, as the district’s natural resources have been under attack for years.

Louisiana wetlands like Pointe aux Chenes provide a crucial environmental service for the country as a whole. As the conduit between the freshwater of the Mississippi River and the oceanic Gulf of Mexico, thousands of acres of brackish swamp provide crucial ecosystem services like water purification, flood protection, shoreline stabilization and groundwater recovery. Further, the wetlands are a much needed “last line of defense” from superstorms in the gulf region by providing a natural buffer to wind and water surges like those that destroyed levees during Hurricane Katrina in 2005. And they are home to thousands of species of flora and fauna from the shrimp and crabs that buoy local economies to the bald cypress trees that have evolved to withstand flooding better than any other species.

Efforts are now underway to use the very ecosystem services that were decimated in the region to pay for its recovery. When the financial value of the region’s many services is calculated, it turns out the area is much more valuable protected than it is decimated for its natural resources.

The Restore the Earth Foundation, led by executive director PJ Marshall, is using the value of these services to make the business case for protection to companies large and small. According to Restore the Earth’s proprietary EcoMetrics model, $1 of investment in wetlands restoration produces $9 of value. That value comes in the form of everything from tangibles like water and carbon credits, sustainable timber harvests, and hunting licenses to more difficult-to-value benefits like strengthened social bonds from fishing trips. While that might sound tough to put a number on, Restore the Earth’s methodology is compliant with global players in the ecosystem services valuation business from International Integrated Reporting Council (IIRC), to Social Value International and Winrock International.

Restore the Earth, along with the United States Business Council for Sustainable Development (U.S. BCSD), launched a call for $1 million in funding, which will be used to restore an initial 1,000 acres at the Pointe aux Chenes Wildlife Management Area, which is owned and managed by the Louisiana Department of Wildlife & Fisheries.

The fund will leverage financial commitments from the business sector with public-matching private grants from a fund the created by the North American Wetland Conservation Act for wetland restoration. The $1 million will go directly to restoring the target 1,000 acres in Pointe aux Chenes: cleaning waterways, reducing salinity, planning trees and encouraging native wildlife to return. Right now several large organizations including Entergy, Shell, Violia, Coca-Cola and Mosaic have expressed interest or made verbal commitments to donate to the fund. It’s an easy sell, said Marshall of Restore the Earth Foundation. When she explains the benefits for the local region, companies are delighted to participate, with reps saying, “We’re so excited to take action, we are sick of just talking about this!” Marshall explains.

In addition to its local significance, the entire Mississippi River Delta, of which Pointe aux Chenes is a small part, is a critical economic hub generating $200 billion in financial value, according to a recent Restore the Earth report. It produces “92 percent of the nation’s agricultural exports; 78 percent of all the grain grown in the U.S. is transported down the Mississippi River; and 30 percent of the seafood in the United States comes from the Gulf Coast,” according to a report from Oxfam America.

By investing in local resiliency, like encouraging shrimp and crab populations to return so local fishermen can get back to work, companies can protect the very natural capital – healthy forests and waterways which protect the area from dangerous storm surges — they require to do business.

Susan Fernandes, director of the U.S. BCSD Louisiana Water Synergy Project explains: “Most of our project members are from heavy industries — refineries, chemicals, steel mills — and they can’t move those operations, so investing in landscape restoration creates a natural buffer against storms that may pose a risk to their operations.”

While this project will impact only 1,000 acres of degraded wetlands, if successful, it will serve as a model for global restoration. Wetlands the world over are under siege, and restoration at scale has the potential to reduce climate change on a global level – an estimated half a degree Celsius, Marshall said. That’s a quarter of the total scientists agree is key to halting the worst impacts of climate change. It’s also the committed savings agreed upon at last year’s COP21 climate talks in Paris. “Restoration can absolutely move the needle on the average global temperature,” she explained.

So, what makes this project different from any other tax-deductible donation a company could make? For the most part, these investments are booked as donations, but the case for choosing this donation over the thousands of other options available comes down to the social return on investment, or SROI. With this donation, a company gets more than a thank-you letter. Many companies with operations in the Mississippi River Delta can’t move operations. A donation to restore wetlands (which they admittedly have played a part in degrading) can help with everything from risk abatement from avoided storm surges to water and carbon offsets the company might purchase anyway. As a local employer, companies value their local reputation — and wetland restoration that restores hunting, fishing and swimming grounds makes for an improved reputation and happy employees.

While the group has a modest start with the 1,000 acre, $1 million fund, it has a big vision to restore 1 million acres in the region. This is the number the U.S. Fish and Wildlife Service estimates is key to creating a “tipping point” wherein positive feedback loops are triggered and the region takes care of itself the way it did before industrialization degraded it. A restoration of this magnitude could reduce the carbon footprint of the entire United States by 2 percent, according to estimates from the Environmental Protection Agency. At this scale, the project’s 9X return gets even better — $168 million is created in value when only $5 million is invested, according to Restore the Earth, equating to $33 in value for every dollar invested.

While some may quibble with the details of the calculations, like the precise economic value of social wellness, there is no denying that a modest corporate donation can be quite impactful if used strategically. Restore the Earth and U.S. BCSD are currently seeking contributors; interested parties can learn how to invest here.

Article originally published on triplepundit.com on 7/31/16.