A “Perfect Storm” of Cooperation Along the Gulf Coast 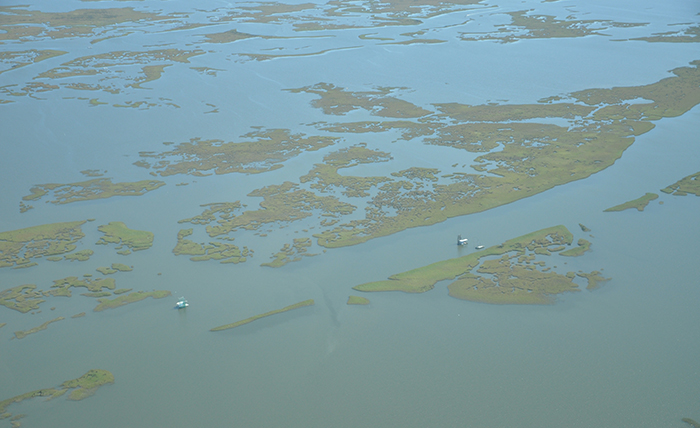 Even though we speak often of the value of the Mississippi Delta area and the Gulf Coast in general, many still do not realize how important that area really is. More significantly, many do not realize how critical the situation is getting in regard to vulnerability. Storms like Katrina and Rita reveal the catastrophic risks, but equally risky, is the slower loss of protection and resilience along that area.

The ecosystem and environmental value of the area is profound. The Gulf Coast represents some of the most diverse and sensitive ecosystems in the United States. And the economic value is also evident when we speak of the fishing industry, tourism, and overall commerce associated with the population centers along the Gulf. But did you know that area also includes over 2 trillion dollars of industrial infrastructure, most of which is critical to the nation’s energy supply, stability, and security?

The loss of wetlands and other natural features, which serve as buffers for storms and sea level rise, is occurring at an alarming rate. With so much land loss, this infrastructure, as well as the population centers, become more vulnerable to damage. The solution is not simple, nor is it something that “they” or “the government” can address alone. Instead it will take innovative combinations of solutions and significant collaboration of key players to get ahead of the risk.

Fortunately, there is underway a coordinated effort and a bringing together of forward-thinking partners, that may very well hold the key to a logical, practical, and realistic way to address the expansive, and expensive, work that needs to be done. What makes the Louisiana focused effort cutting edge, and a peek into what the future can hold, is its collaborative and integrated nature.

I wish to highlight three initiatives with which I have been engaged over the past few years that are now working together to capitalize on the economy of scale, demonstrating the old adage “the whole is greater than the sum of the parts”.

First, is Restore the Earth Foundation’s (REF) Pointe-aux-Chenes project that will restore 4000 acres of freshwater-forested wetlands in a sensitive and valuable ecologic area, and serve as the catalyst piece of much grander scale restoration. REF believes that landscape scale restoration is most effective and efficient in helping to solve the problem of ecosystem loss, and how such loss can impact the environment, wildlife, and the economy. The 4000 acres of restoration is but the seed, the beginning. REF is also innovative in two other ways in regard to this work. One is how they leverage public and private sector funding to get more value from every dollar invested. Second, is how they can determine, in dollars on the bottom line, the social and economic value of the restoration work. Many may immediately understand the qualitative value of restoration, but the REF EcoMetrics model can actually quantify that value. Why is that important? If the return on investment is clearer, a company is more likely to see the true value and impact on the bottom line and to risk mitigation, and therefore opt to invest.

Second, is the Water Synergy Project of the United States Business Council for Sustainable Development (USBCSD-WSP). This is an initiative made up of companies, NGOs, and public sector players from along the lower Mississippi River that recognize the risk associated with water in this region. The WSP members contend that working together on tangible projects, combined with productive dialogue with local, state, and Federal entities, will lead to more resilience and improvement in the corridor. The WSP initiative has looked into nutrient loading issues, wetlands for water treatment, and other efforts that will help the quality and quantity concerns along the Baton Rouge to New Orleans corridor. REF and USBCSD-WSP have recently entered into a formal alliance.

Thirdly, and the newest effort, is the Gulf Coast Industrial Infrastructure Task Force, conceptualized and co-led by The Water Institute of the Gulf (TWIG) in partnership with the USBCSD-WSP. The idea of the Task Force is to bring together companies with assets in the Gulf area to pool their resources for implementation of large-scale projects that will work towards increasing resilience and reducing the risk to the 2 trillion dollars of coastal infrastructure.

These three efforts are all connected- and bring together the restoration savvy of REF, the convening and facilitating power of the USBCSD-WSP, and unmatched scientific understanding of the area by TWIG; to collectively address the growing challenge of coastal vulnerability. And we need to note the public sector involvement aspect, because partners from local, state, and Federal entities who bring technical, financial, and policy resources are also actively engaged in the efforts and discussions.

Because the only way to protect this sensitive, valuable ecosystem that is integrated with a critical component of the nation’s security and economy, is to leverage all resources- private and public- to get it done. The whole is indeed much greater than the sum of the parts.

This blog was originally published on The Pinero Group’s website on August 8, 2016.