Louisiana Floods: Restoration Will Help Us Build Back Better 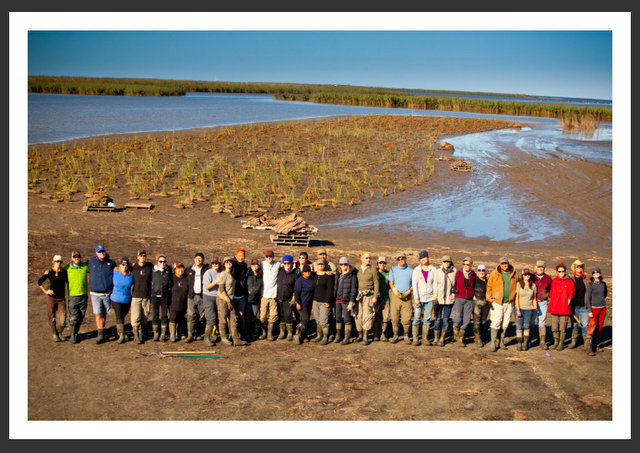 In Baton Rouge these past weekends, the “Cajun Navy” was out in force cleaning up after the devastating Louisiana floods that killed 17 people and forced thousands of others to leave their homes. Despite the crushing heat and debris-filled neighborhoods, the mood felt oddly cheerful as volunteers hefted water-logged furniture, drywall and insulation out of homes and distributed sandwiches and snacks to neighbors, family, and strangers who were affected by what is described as the worst storm since Hurricane Sandy.

In Louisiana, we have become used to this pattern: rain, flood, cleanup, rebuild.

Unfortunately, floods like this are no longer once-in-a-millennia aberrations. This is the eighth time Louisiana has flooded since May of last year, and this storm rivaled the power of a hurricane, dumping 21 inches of rain in 48 hours.

When President Obama visited Baton Rouge last Tuesday, he praised the recovery efforts. “I know how resilient the people of Louisiana are,” he said. “And I know you will rebuild again.

Obama echoed a common refrain we hear after almost every natural disaster: Build back better.

This time, we need to do more than just rebuild. We need to restore the earth.

For too long, human and industrial development has worked against nature, knocking out the ecosystems that create a natural defense against storms. Over the past half-century, we have all but rubbed out the coastal estuaries, wetlands, and forests that protect our communities and economic infrastructure from a changing climate. Today, Louisiana loses wetlands at the rate of one football field every hour. This is significant because wetlands absorb storm surge. For the more than 2 million people living in south Louisiana, the existence of healthy wetlands means the difference between safety and more frequent, severe flooding.

The good news is that we can restore this land, and as the nation focuses on rebuilding after the floods, it is critical that we include landscape-scale restoration as an essential part of this effort.

A relatively unknown concept, landscape-scale restoration is surprisingly simple and incredibly effective: Using a science-based approach, we can rebuild natural hydrology and replant native trees and plants to restore entire ecosystems. My organization, Restore the Earth Foundation, has been using this approach to restore degraded land in Louisiana ever since Hurricane Katrina, which was not only one of the country’s most devastating storms, it was also the largest forestry disaster in U.S. history. Working alongside federal and state agencies, as well as private, philanthropic, and community organizations, we reforested 45,000 acres along the Gulf Coast.

Restoration is such an important part of climate mitigation that it is codified in Article 5.1 of the international Paris Agreement on climate change. Earlier this year, the U.S. Department of Housing and Urban Development announced $1 billion in grants to help communities invest in climate resilience. The largest of those grants are going to Louisiana, including for projects that protect coastal wetlands and restore the land.

Our vision is to restore more of these ecosystems so they can work properly and help provide for and protect our communities and economy.

But in order for this to happen, we need more support. We need public agencies, private industry, and likeminded nonprofit and community organizations to come together to support funding, access to land, science and research, and program implementation.

We all have a stake in this—not just those of us in Louisiana. Climate change is the new normal, and it’s affecting us all. In the past 18 months, more than 200 people have been killed by floods in the United States. The third National Climate Assessment, released in 2014, showed that “the amount of rain falling in very heavy precipitation events” has been significantly above average since 1991. In other parts of the country, wildfires are raging—getting worse every year because of record-breaking heat waves such as the one we had in July.

We need to change our trajectory, and one action we can take right now is to invest in landscape-scale restoration. In October, my organization will break ground on a new project to restore 4,000 acres of freshwater-forested wetlands in the Pointe-aux-Chenes Bald Cypress Forest. This essential ecosystem is the largest landmass providing the last line of defense protecting 200,000 people from the open water of the Gulf of Mexico. This project is part of a larger initiative my organization is leading to restore 1 million acres of degraded land in the Mississippi River basin, North America’s Amazon.

For me, this project has taken on new meaning—and renewed urgency. It will give me a chance to get my hands dirty and do something tangible and real to help protect my family, friends, and neighbors. Coming together to replant and restore gives people a common purpose and builds relationships that make our communities stronger. It also gives us hope that, even during this time of loss, there is something we can do to create a brighter future.

For the people of Louisiana, restoration can help heal their communities. For the country, restoration can change our path from degradation to resilience. It’s time to make landscape-scale restoration part of the effort to build back better.

This article was originally published on Huffington Post on 8/31/2016.