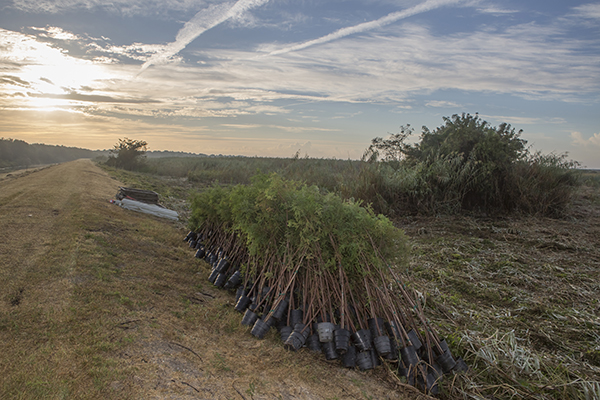 Pointe-aux-Chenes, Louisiana—October 2016—On October 27, Restore the Earth Foundation will break ground on a bold new landscape-scale restoration project to restore one million acres of degraded land in the lower part of the Mississippi River Basin— a vast ecosystem once so rich in biological and environmental resources that it was compared to the Amazon Rainforest.

The October 27 event will break ground on the first stage of this ambitious mission, with a project to restore 4,000 acres in Louisiana’s Pointe-aux-Chenes Bald Cypress Forest Wetland. Ultimately, Restore the Earth’s 15-year project to restore one million acres in “North America’s Amazon” will help the U.S. meet national climate targets while protecting people and economic infrastructure in the Gulf Coast from the threat of increasingly harsh storms and floods.

“North America’s Amazon is rich in physical, biological, and socioeconomic resources that millions of people and businesses depend on,” said Restore the Earth Co-Founder and Executive Director PJ Marshall. “But human and industrial development have degraded these lands, forests, and coastlines, which are now at even greater risk due to our changing climate.

“The good news is that by investing in landscape-scale restoration that rebuilds ecological health and integrity at the ecosystem level, we can restore North America’s Amazon and protect the health, resiliency, and sustainability of local communities and the national economy.”

Restore the Earth has formed several public-private partnerships to support this initiative. Its first collaborative venture is with the United States Business Council for Sustainable Development (US BCSD), including members CITGO, Entergy, Shell, and VMWare

Restore the Earth’s public partners—including Louisiana Department of Wildlife and Fisheries (LDWF) and the Lower Mississippi Joint Venture and its partners, including the U.S. Fish and Wildlife Service—provided in-kind support as well as access to land and scientific expertise.

“Restoring North America’s Amazon takes visionary leaders in business, government, and nonprofits joining together to advance this critical initiative,” said Marshall. “As we break ground on Pointe-aux-Chenes, we are excited about new partners entering this collaboration.”

Spanning 1.2 million square miles, the Mississippi River Basin—North America’s Amazon—is the third largest watershed on Earth, encompassing 31 U.S. states and two Canadian provinces. A critical ecosystem that is rich in biological diversity, North America’s Amazon plays a global role in climate change, the water cycle, and ocean acidification. It is an environmental and economic powerhouse. Millions of people and billions of dollars depend on the benefits it provides, from national and international commerce and transportation, recreation, and tourism, to hurricane defense, clean air, and climate change mitigation.

Over the past 100 years, industrial and human activity has degraded North America’s Amazon. The southernmost region of North America’s Amazon, the lower Mississippi River Basin, is the most ecologically degraded area on the continent. Once covered with 24 million acres of forest, only 5 million acres remain today. In Louisiana’s coastal areas, wetlands loss occurs at such a fast rate that an area the size of a football field disappears every hour. This year, the dead zone in the Gulf of Mexico reached 6,824 square miles—an area the size of Connecticut.

Located in Terrebonne and Lafourche parishes, approximately 15 miles southeast of Houma, this site is an essential ecosystem that provides the last line of defense from the threat of storms and land loss for more than 250,000 people, including the United Houma Nation and Pointe-au-Chien Indian tribe. The region is also home to threatened and endangered species, commercial and recreational fisheries, and a rich diversity of wildlife and birds.

In 2005, hurricanes Katrina and Rita damaged levees along the Gulf of Mexico, leading to major forest degradation, habitat deterioration, and reduced wildlife use. As a result, this area lost an extreme amount of land, with contiguous sections of wetlands now covered in open water.

Restoring 4,000 in Pointe-aux-Chenes will benefit the environment, the community, and the local economy in many ways:

MULTIPLYING BENEFITS FOR PEOPLE, THE PLANET, AND THE ECONOMY

Through its EcoMetrics Model, Restore the Earth quantifies the full financial value of restoration’s environmental, social, and economic impacts, and aligns these with the International Integrated Reporting Council (IIRC)’s Framework. This proprietary model proves that for every $1 invested in landscape-scale restoration, more than $9 in environmental, social, and economic value is created.

“Restoring North America’s Amazon presents a tremendous opportunity to multiply benefits for people, the planet, and the economy,” Marshall said. “Moreover, this project will help the United States meet the international climate targets established in the Paris Agreement at COP21. With this groundbreaking, the restoration has truly begun.”

ABOUT RESTORE THE EARTH FOUNDATION

Restore the Earth Foundation, Inc. is 501(c)(3) not for profit, and its mission is to restore the Earth’s essential forest and wetland ecosystems, delivering outstanding environmental, social, and economic returns. Restore the Earth has secured over $35 million from private and public sources and has successfully restored over 45,000 acres along America’s Gulf Coast. Today, these reforested areas have restored habitat, created jobs, and brought back the landscape’s green attributes and benefits that contribute so much to the nation’s communities and culture. To learn more, please visit www.restoretheearth.org.

WHAT PARTNERS ARE SAYING ABOUT THE NORTH AMERICA’S AMAZON INITIATIVE

Nicola Acutt, Vice President of Sustainability Strategy, VMware: “We all know what they say about first impressions, and Restore the Earth Foundation’s first impression on our team was unanimous—we were instantly inspired by the scope of the ‘North America’s Amazon’ project and, more importantly, their holistic approach to value. This is a great example of the kind of boldness we need to tackle climate change, working strategically and at a scale to make a difference. As a software technology company, VMware values the kind of innovative thinking behind a project like this, which is why we were compelled to join this effort. We also see this as a positive and tangible opportunity to engage our broader community in addressing climate change impacts, while putting back more into our larger community in the United States. We are thrilled to support Restore the Earth on such an important project.”