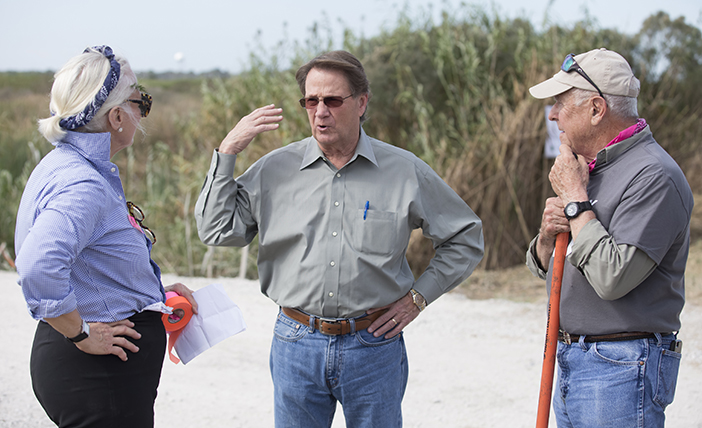 Louisiana Department of Wildlife and Fisheries Secretary Charlie Melancon speaks with REF Co-Founders Marv and P.J. Marshall at the Groundbreaking on October 27th

Oct. 28, 2016 – “You have our total support,” Louisiana Department of Wildlife and Fisheries Secretary Charlie Melancon pledged Thursday to a national organization attempting to restore some 1 million acres of land along the Lower Mississippi River Basin, or as Restore the Earth Foundations calls it, “North America’s Amazon”.

Melancon was a guest speaker at the Restore the Earth Foundation’s kick off activity – the planting of trees at Pointe-aux-Chenes Wildlife Management Area in Terrebonne Parish. Volunteers from several public and private businesses and groups participated in the effort that will eventually reach 4,000 acres planted along the coast.

“This is a great public and private partnership for a great cause,” Melancon said. He told REF officials that Louisiana will “work alongside you as long as it takes to get this done.”

P.J. Marshall, co-founder and executive director of REF said, “To address the significant coastal wetland loss here in Louisiana, and the bigger issues of environmental degredation in the United States and around the world, we need big picture goals and diverse, collaborative partnerships which bring together visionaries from government, non-profits and companies to restore the Earth!
Its projects like these where collaboration becomes impact.”

REF says if its goals are met, the result will be: the reduction of America’s carbon foot print by 2 percent, the reversal of the Dead Zone in the Gulf of Mexico by 12 percent; improved water quality; mitigation contaminates reaching the Gulf of Mexico; and the creation of jobs.

REFs has created partnerships with the Entergy, Shell Oil, CITGO, VMware, U.S. Business Council for Sustainable Development (US BCSD), Louisiana Department of Wildlife and Fisheries, the Lower Mississippi Valley Joint Venture, the United States Department of Agriculture, the National Fish and Wildlife Foundation, the U.S. Fish and Wildlife Services and others.

REF, based in Ithaca, NY, with offices in New Orleans, was founded in 2010 and set its mission to restore the Earth’s essential forest ecosystems.

The Louisiana Department of Wildlife and Fisheries is charged with managing and protecting Louisiana’s abundant natural resources. For more information, visit us atwww.wlf.la.gov. To receive recreational or commercial fishing email and text alerts, signup at http://www.wlf.la.gov/signup.

This press release was originally published by Louisiana Department of Wildlife and Fisheries.