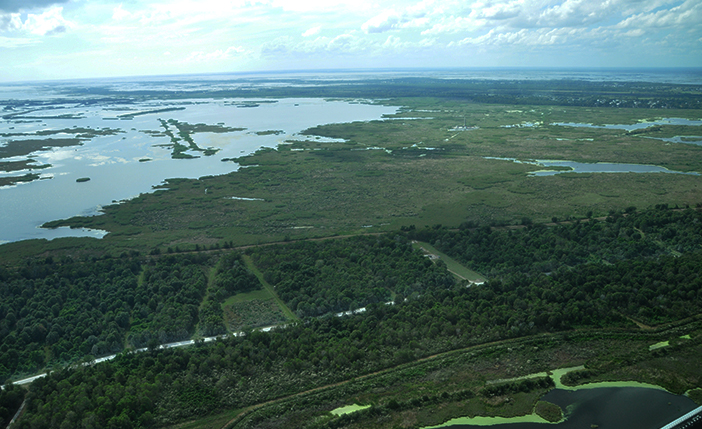 By Kevinisha Walker, The Houma Courier

Until the mid-20th century, bald cypress filled 4,000 acres of Pointe-aux-Chenes’ forested wetlands, but erosion, sinking land and Gulf of Mexico storms have since destroyed most of them.

In 2002, an oil and gas company tried to restore the area by replanting cypress, but a storm devastated the area, and restoration efforts waned. Nearly a decade later, scientists with the Louisiana Department of Wildlife and Fisheries started to see a few trees pop up out of the grass. After investigating, they discovered that the trees were from the original cypress planted in 2002.

Soon afterward, Wildlife and Fisheries biologist Shane Granier and colleagues decided to replant cypress in hopes of restoring the swamp to its original condition.

Now, the department has joined forces with the Restore the Earth Foundation, a not-for-profit organization that works to restore forest and wetland ecosystems, to accomplish the mission.

The area, called North America’s Amazon by Restore the Earth Foundation Founder and Executive Director PJ Marshall, is only the first part of the Mississippi River Delta to be restored. The foundation hosted a groundbreaking ceremony Thursday at the Pointe-aux-Chenes site.

Over the next 15 years, Restore the Earth and its partners plan to restore 1 million acres in south Louisiana that will help protect people and infrastructure from storms and floods.

“All of these larger projects aren’t in isolation,” Marshall said. “They begin to have a connective impact on the wetlands that are adjacent to them. And doing them at this kind of scale then begins to have exponential value. And being one of the largest projects that’s ready to go, we’re looking at this as the start of having an exponential impact moving to the east of here in particular.”

By restoring these wetlands, not only will people and infrastructure in surrounding communities benefit, but so will native wildlife and fisheries, coastal wetlands and watersheds and recreational activities such as hunting and fishing.

“Having a cypress forest is better than having nothing when it comes to storm-surge protection,” Granier said. “You also have the cultural aspect of it. Guys who work for me from this area tell me that when they were kids, they used to walk through the forest to go duck hunting and things like that. Bringing that back for those generations and future generations and having access is nothing but a benefit from every standpoint.”

As the foundation and its partners, including Resource Environmental Solutions, work to grow new trees, they are looking at the process from a sustainability standpoint.

“We pot our liners (seeds) up in April, May and June in our tree bays, grow them throughout the year, then start installing them from October through April of the following year,” Pierce said.

Currently, the company is planting in a way that will have trees skip the juvenile phase. Some trees that are 6 or 8 months old will be ready to go onto the adult stage.

“With a healthy root system and with rich soil like at the restoration site, in five years we’ll have about a 95 percent survival rate,” said Marvin Marshall, founder and chairman of Restore the Earth.

This article was originally published in The Houma Courier and can be found online at houmdatoday.com.