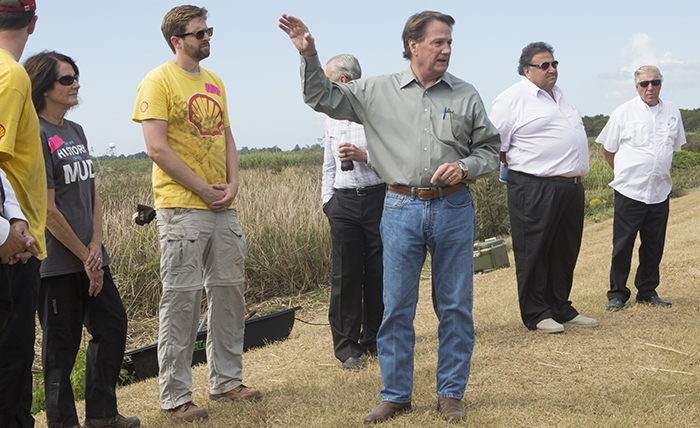 Charlie Melancon, Secretary of Louisiana Department of Wildlife and Fisheries, addresses guests at the Groundbreaking.

By Sean Ellis, The Houma Courier

A nonprofit organization broke ground today on an initiative to restore 1 million acres of land in the Mississippi River Basin with the planting of trees in Pointe-aux-Chenes.

P.J. Marshall, co-founder and executive director of the Restore the Earth Foundation, said that the project is the beginning of the organization’s efforts to restore the land in the basin, which the organization refers to as North America’s Amazon. The tree planting involves the first 1,000 acres of a 4,000-acre project in the Pointe-aux-Chenes Bald Cypress Forest Wetland that will take place over the next year.

The people of Louisiana know why it is necessary that something like this be done now, Marshall said.

“We need to start stopping the loss of land that you all are experiencing on an hourly basis. From a local, regional, national and global basis, we need to start having an impact on the climate change that we are having around the world,” she said.

The project, Marshall said, will reduce the carbon footprint of the country by 2 percent and will also reverse the human impact in the dead zone in the Gulf of Mexico by 12 percent.

State Department of Wildlife and Fisheries Chairman Charlie Melancon said the trees that were planted in Pointe-aux-Chenes decades ago, which are now thriving, are proof that these types of projects work.

“Some of the scientists say you’re down there in the coastal marshes, it’ll never work. This is a piece of land that they thought was lost a number of years back. It’s being regained. Not only will this accomplish the air quality goals, but we will also recapture land. It’s a great challenge. That’s a hell of a lot of land. We’ll get it done in time,” he said.

Terrebonne Parish President Gordy Dove said the parish has gone from doing a little to a lot in terms of effort in the realm of coastal restoration and protection.

“About two miles south of here is a levee system that will help protect these trees during a hurricane and keep the high salinity water from coming in,” he said.

The restoration project is very much so needed, Dove said, because the eastern side of Terrebonne Parish is seeing the worst erosion because of salt water intrusion.

Terrebonne Levee District Director Reggie Dupre said after hurricanes Katrina and Rita, 80 percent of the land to the south of the parish levee in the wetland, where the trees are being planted, was open water.

“Now, it’s starting to come back. Not only do we have this parish levee, but we also have the Morganza levees. Before our very eyes in the last eight years, we’re seeing fresh water habitat coming back,” he said.

Shell and Entergy are also partners on the project in addition to the U.S. Business Council for Sustainable Development, the Lower Mississippi Joint Venture and the U.S. Fish and Wildlife Service.

This article was originally published in The Houma Courier and can be found online at houmatoday.com.