Trebor, who works for longtime REF partner Louisiana Department of Wildlife and Fisheries, and his dog Roseau, who has been our planting companion on many outings, came to the rescue last month to help boaters who were stuck on a mud flat. Read the heartwarming story below. 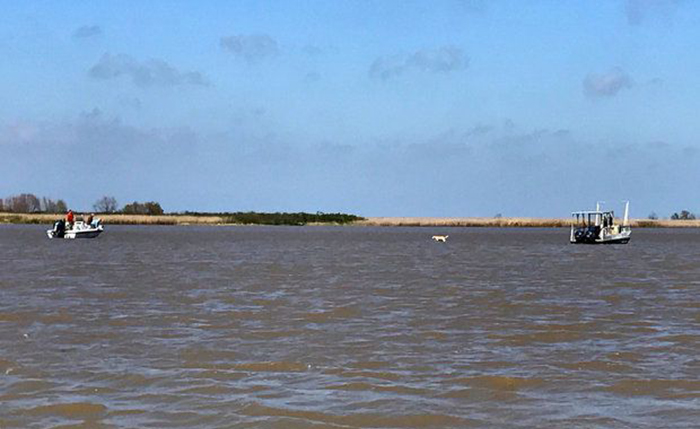 There’s no more frustrating feeling than seeing a stranded boater on a mud flat and having no way to reach him or her without getting stranded yourself. You can shout condolences and commiserations, but the poor stranded soul might as well be on the moon.

Trebor Victoriano knows the feeling well. As a technician supervisor at the Louisiana Department of Wildlife and Fisheries satellite station at the mouth of the Mississippi River, he’s seen literally hundreds of boats run up on sand bars or mud flats so shallow they wouldn’t float a bathtub toy.

That happened to Victoriano Tuesday.

“I was bringing the airboat around, and I saw a boat out at the corner of Pass a Loutre and Dennis Pass, near the easternmost island,” he said. “I knew what was going on. People get stuck there all the time. I told them I’d be back in a couple minutes.”

That stuck boat was a 24-foot Champion that belonged to Travis Fortner of Little Rock, Ark. He and two buddies had been stranded there for 90 minutes before Victoriano happened along.

Fortner has been fishing Venice since Katrina and has run Pass a Loutre “a million times,” he said, but he was off his game Tuesday and not paying close enough attention to his exact location. By the time he realized his mistake, it was way too late.

“We were stuck — bad,” he said. “The three of us got out, and we couldn’t even budge the nose of the boat. It was just like that boat was sitting up on a trailer.”

Fortner hoped Victoriano could have pulled him off with the airboat, but the department technician told him that wasn’t possible because of the volume of air pushed backward by the powerful propeller. He was confident a boat back at the camp would do the trick, however. It’s a decked-out flat boat that employees use to transport 4-wheelers and tractors to clear trails and mow grass.

“We call it the tow truck because we use it for that a lot,” Victoriano said. “We’re not going to leave somebody stranded.”

When Victoriano returned, it appeared to Fortner that there was still a problem. The mud flat was so extensive that Victoriano couldn’t get anywhere near the stranded bay boat. But Victoriano had an ace up the sleeve of his department-issued uniform. It was his Labrador retriever named Roseau.

“The plan was for him to cast his rod, hook the tow rope and reel it in, but they were too far away,” Victoriano said. “So I clipped the tow rope to my dog’s collar and sent her off. I told her to go on the boat, and she walked over to them.”

Fortner couldn’t believe what he was seeing.

“When he attached that tow rope to that dog — man, it was awesome,” Fortner said. “He said, ‘Go, Roseau,’ and she jumped off that boat and walked straight across the mud flat.

“She put her front paws up on my boat, and we pulled her in. She walked around the boat for a minute, went right up to the front deck and laid down.”

The boat was so high and dry that pulling it off was still a project. Victoriano had to attach two ropes to allow himself to reach deep enough water to trim the motors down and let the props really grab. Eventually, though, he succeeded, and the big Champion was floating again.

Victoriano moseyed over to Fortner’s boat to retrieve Roseau.

“I tried to pay him,” Fortner said, “but he said, ‘No way. This is what we do. I’m a public servant.’ The best part of it was his attitude. He was genuinely happy to help.

“He could have been like, ‘Oh, these idiots from Arkansas came down here and got stuck on a mud flat,’ but he wasn’t that way at all.”

Victoriano said the joy for him was getting to watch Roseau work. She’s a native of Venice, having been part of a litter produced by a Lab that lived in the area. Her mother was a rescue dog that resided on an oil platform near the camps on Pass a Loutre, Victoriano said.

“During duck season, one of the duck dogs down there bred her, and Roseau was part of her second litter,” he said. “She’s a killer dog. At 12 months old, on her first hunt, she retrieved 18 ducks, a three-man limit.

But far and away, her best retrieve was three Arkansas anglers on Tuesday.

Used with permission of The Times Picayune and NOLA.com