Betting on a Big Vision 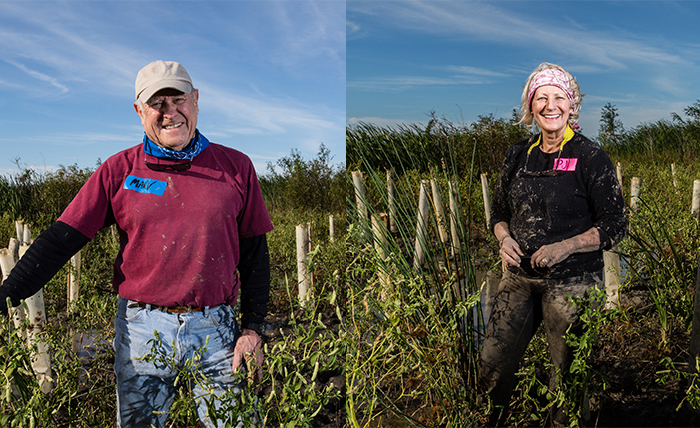 1% for the planet highlights and interviews PJ Marshall, Executive Director and Co-Founder of Restore the Earth Foundation.

Some people spend their retirement years taking river cruises or perfecting their golf swing. PJ and Marv Marshall are spending theirs by raising hundreds of millions of dollars and mucking through the forests and wetlands of the lower Mississippi River planting trees. They are betting on a big vision to create resilient communities, build local economies, and lower the carbon footprint of the entire country.

PJ, a former marketing strategist for professional services firms like Bechtel and Halliburton, and Marv, the former CEO of several major real estate companies, were deeply moved when they saw the unprecedented ecological destruction caused by Hurricane Katrina—destruction of natural habitats that understandably received less attention than the devastating human impact.

“On August 29, 2005, while attending the White House Conference on Conservation, Marv and I stared at the TV screen and watched in horror as Katrina’s 120 mph winds stripped roofs off homes and ripped giant trees from their roots,” recalled PJ. “The hurricane was destroying everything in its path. We were witnessing one of our nation’s deadliest storms and the largest forestry disaster in American history.”

Not long after, PJ and Marv travelled from upstate New York to the coastal communities along the Mississippi River. Meetings with Gulf Coast residents revealed people and communities desperate to restore their forests and ecosystems —the source of their livelihood, identity, and culture. And it was on this fact-finding trip that the couple found a way to use their newfound free time to give back. PJ and Marv, along with their daughter Taylor, an expert in integrated water resource management (IWRM), decided to pool their collective talents. Together, they launched Restore the Earth Foundation and built this nonprofit into a powerful force for taking action on climate change.

Within minutes of meeting PJ and Marv, and hearing about their vision, it becomes clear that they think big. Restore the Earth is actively restoring 1 million acres in the Mississippi River Basin, referred to as “North America’s Amazon.” The third largest watershed on the planet, the Mississippi River Basin is the most ecologically degraded region in North America and has the largest concentration of underserved communities in the United States. Restoring these 1 million acres of forest will offset the climate footprint of our entire country by 2%; reverse the impacts of the dead zone in the Gulf of Mexico by 12%; reduce business risk; make communities more resilient to storms and flooding; create jobs and generate over $12 billion in integrated economic value.

The Marshalls and Restore the Earth Foundation are assembling an impressive coalition of corporate and NGO partners to fund and execute their North America’s Amazon project, the world’s largest landscape-scale restoration project of its kind.

To date, these climate changemakers have mobilized 30,000 volunteers and reforested over 50,000 acres. They have used decades of business experience to create a model that has resulted in nearly 100 partnerships across business, government, academia, and civil society. In the process, they have become leading experts and voices in voluntary carbon offset policy, the science of forest reforestation and wetlands hydrology, and the measurement of SROI (Social Return on Investment).

PJ and Marv’s business acumen truly becomes apparent when one examines the organization’s pioneering funding model and its measurement and reporting structure.

“Landscape-scale restoration projects, projects scaled from 10,000 – 100,000 acres, are costly and complex,” explained PJ. “So, we created an innovative financial model that brings partners from diverse sectors together to aggregate economies of scale. Through our Revolving Fund, we generate a steady stream of capital to propel and expand our work. The Revolving Fund enables us to restore three times the number of acres per dollar than could be accomplished via a conventional philanthropic model.

According to Marv, “PJ and I have been in the corporate world long enough to know that we had to build a strong business case if we were to secure private and corporate investments in this highly ambitious initiative. We had to prove to investors what we knew to be true; landscape-scale restoration generates unparalleled financial, environmental, and social returns through the establishment of natural capital and green infrastructure by working with nature rather than against it.”

Restore the Earth Foundation addresses the biggest challenge in building the business case for landscape scale restoration—capturing the full monetary value created by restoration. Using the organization’s EcoMetrics, Restore the Earth accounts for the social, economic, and environmental value created by landscape-scale restoration and monetizes the impact. All monetized values are fully documented and third-party verified in a report ready for audit. Investors can communicate in financial terms the co-benefits of the ecosystem restoration work and demonstrate the market and non-market value that is created to shareholders and management.

It’s been nearly 13 years since Hurricane Katrina devastated Gulf Coast communities, and PJ and Marv are just as passionate today about their work restoring those ecosystems. When they see how they are bringing together dynamic partners to invest, scale, and amplify the work on the ground, they can’t help but feel optimistic about the future. Their business case model and framework is even in the process of being replicated in Canada, the Yangtze River in China, and other locations around the planet.

So will PJ and Marv ever get around to perfecting their golf swing?

PJ laughs, “We’d rather be out leading a group of our volunteers, knee-deep in mud planting trees.”