Dispatches from China: Part One 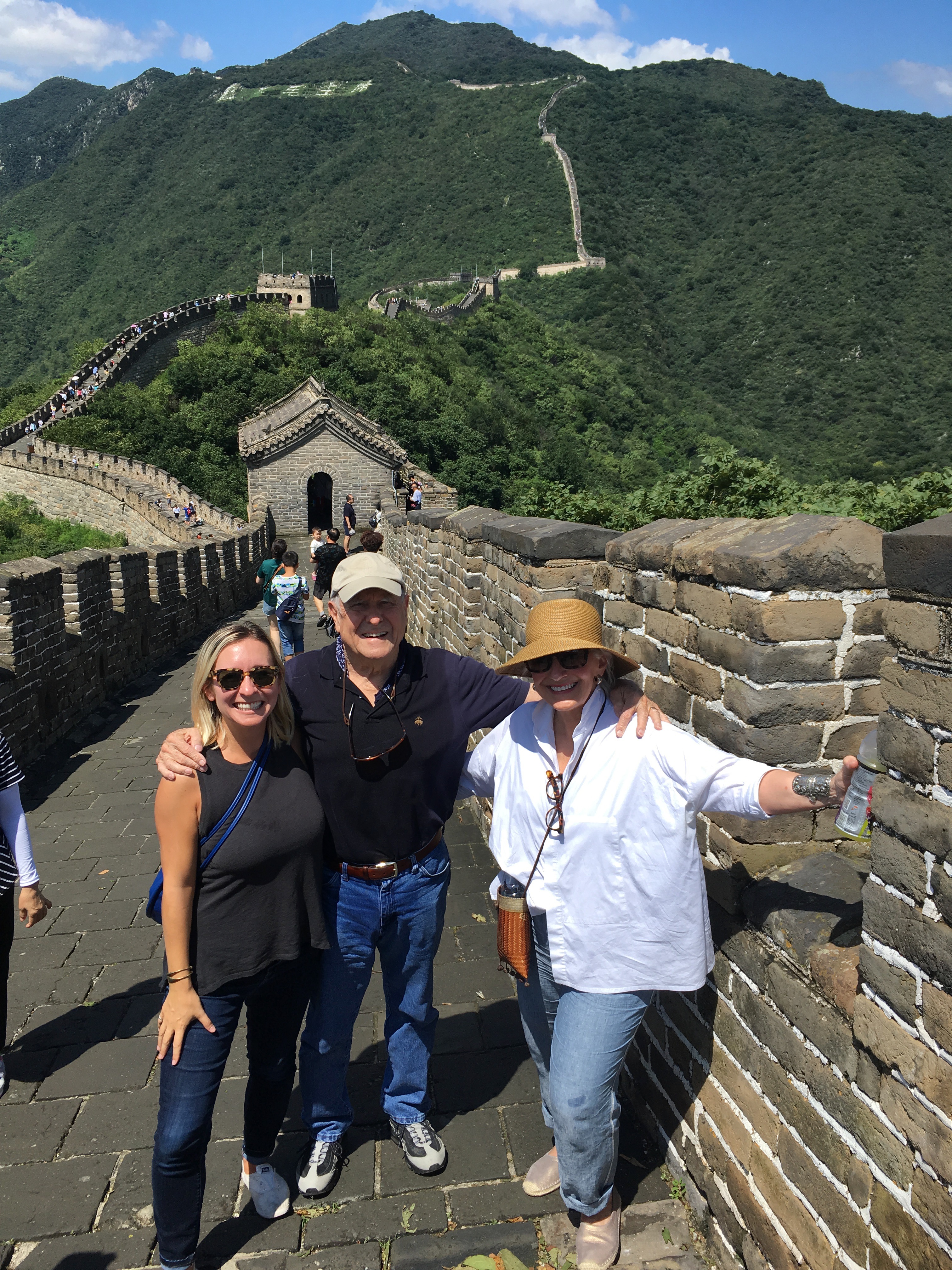 In April 2018, Restore the Earth Foundation signed an MOU with the Chinese Changjiang Conservation Foundation in forming the Mississippi & Yangtze Sister Rivers Alliance – a trailblazing cross-cultural alliance to address the health and vitality of these globally important watersheds.

The intention of this partnership is to explore collaborative efforts to address the ecological restoration of the Mississippi and Yangtze River Basins. Through action, this Alliance will demonstrate an approach that secures diversified private, public and philanthropic investment, applies innovative models and practices in watershed restoration, while increasing social awareness and participation that can be replicated and scaled for the greatest global impact.

In August 2018, Restore the Earth was invited to China as part of a 3-week discovery tour organized by the China Global Philanthropy Institute (CGPI) founded by Ray Dalio, Bill Gates and Niu Gensheng, He Qiaonyu and Ye Qingjun and the East-West Philanthropy Forum (EWPF).

The Restore the Earth Team had never seen the Yangtze or even been to China, so from the outset we knew this would be a once-in-a-lifetime trip. As part of this adventure, we wanted to record and share our experience and musings as we explored China in hopes that it would shed light on the history, experience and outlook of the country as private sector leaders around the world look to partnerships, initiatives and best practices to address the global climate change issues experienced by all.

We had no idea what to expect.  Our three-week journey would take us to Beijing, then 1,200 kilometers west to Ningxia in Central China; 2,500 kilometers south to Wuhan and Yichang (Hubei Province); eastward to Hangzhou, on the coast; northward to Hohhot, in Inner Mongolia; and then back to Beijing – a 6,200-kilometer (3,852-mile) circuit filled with wonders and discoveries at every stop.

Aside from Beijing, with its population of 23 million, all other metropolitan areas we visited were described as “small cities” with populations ranging between 3-6 million – hard to imagine coming from the US, where the largest city is 8.5 million people. The notion of 23 million residents blew our minds.

Our multiple hosts along the way opened doors we could have never experienced on our own.  In this series of dispatches, we are excited to share our observations in a four part series with a new ‘dispatch’ every two weeks.

Starting Out in Beijing 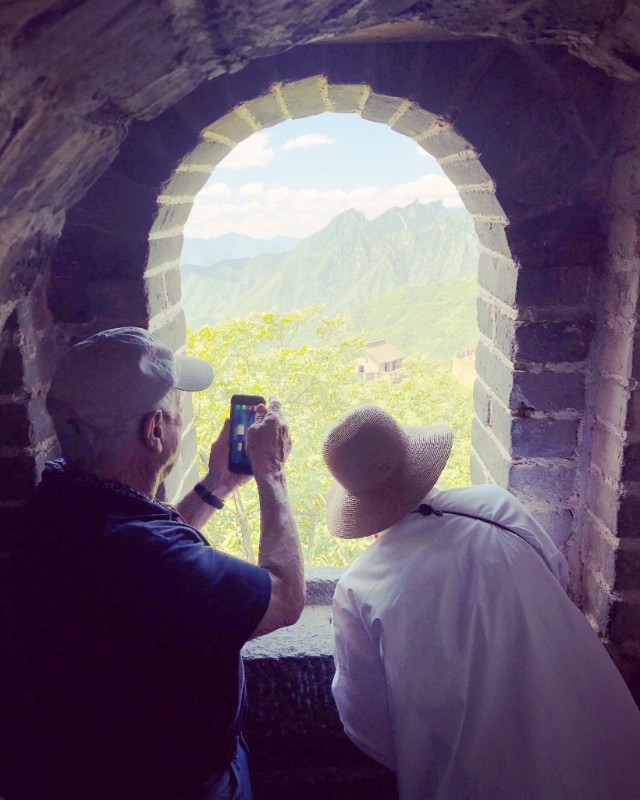 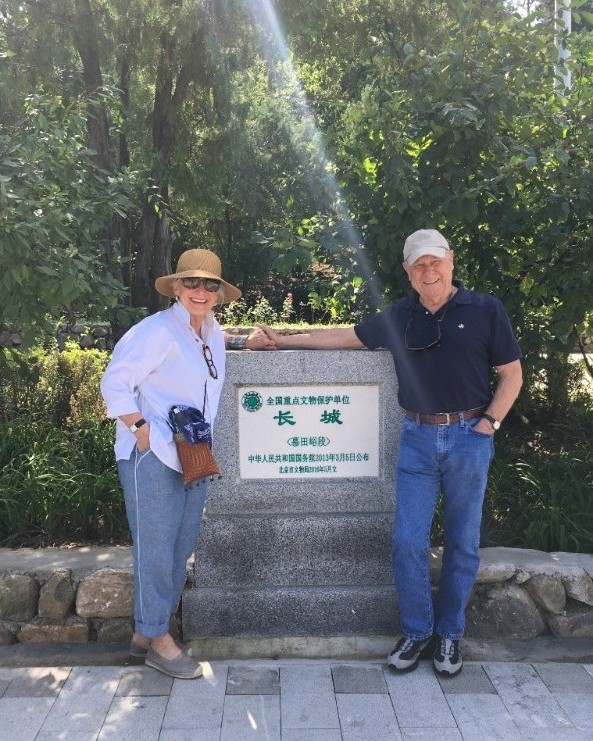 Our China starting point was Beijing, the 2,500-year-old city that at the time had 600,000 residents, known for centuries in the West as Peking as a result of a French missionary misunderstanding the Chinese pronunciation of the city’s name.

Beijing, as we discovered, like all the “small cities,” has the very latest design and technology in highways, transportation, bullet trains, and cutting-edge architecture, creating miles and miles of new office buildings and high-rise condos to accommodate its growing population.

Our first two days of adventure focused on its history, starting with a visit to the Great Wall at Mitianyu, a well-preserved section of this mind-boggling human-engineered wonder that took 1,000 years to build.  There we magically peered into ancient China. 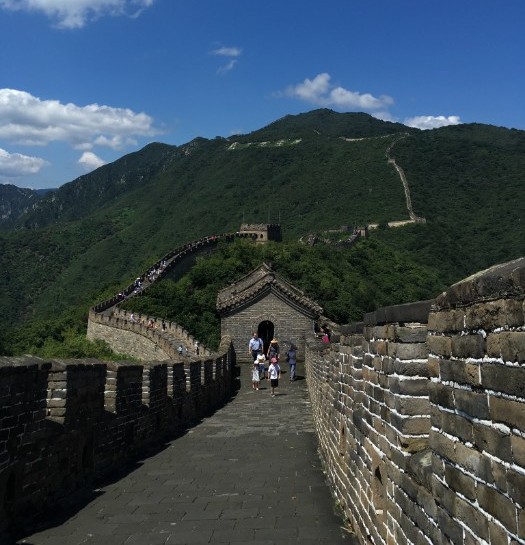 Did You Know? Much of the mortar for The Great Wall was made from sticky rice, eggs and lime. Laborers were frequently buried in the wall because the wall construction sites were so isolated and very far from their homes. 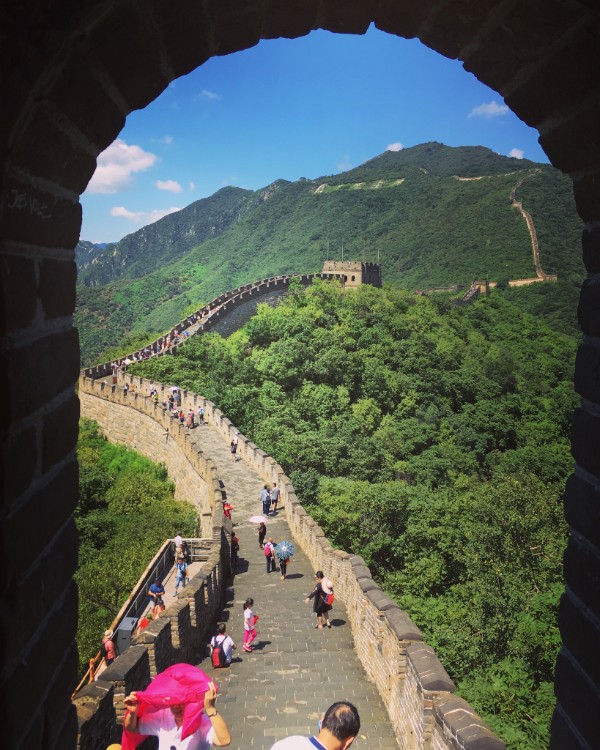 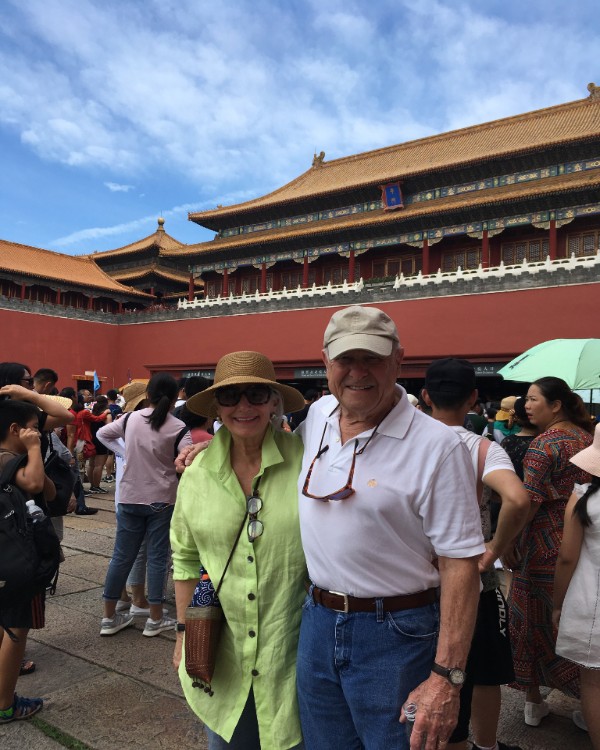 At Tiananmen Square we were delighted to see the dense crowds were all families and school groups – and almost all Chinese. We saw but a handful of “westerners” there. In fact, we were spectacles ourselves. Some in the crowd asked to take selfies with us.

From Tiananmen Square it’s a straight walk into the Forbidden City, and then to the Temple of Heaven. The path is a succession of gates and pavilions symbolizing and magnifying the power of the Emperor as you get closer to the inner most part of the Emperor’s hidden spaces and refuge. The Temple of Heaven was meant for the Emperor only – and the design, symbolism and grandeur are at their most exquisite. 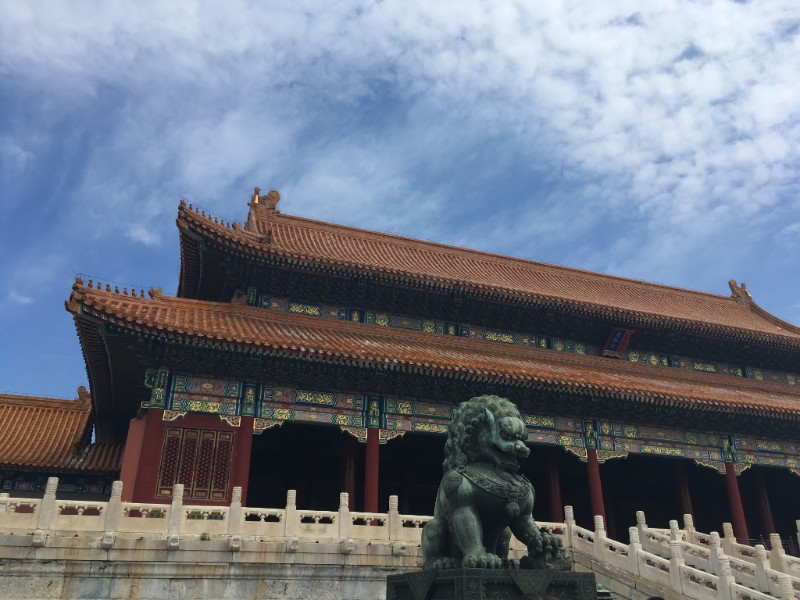 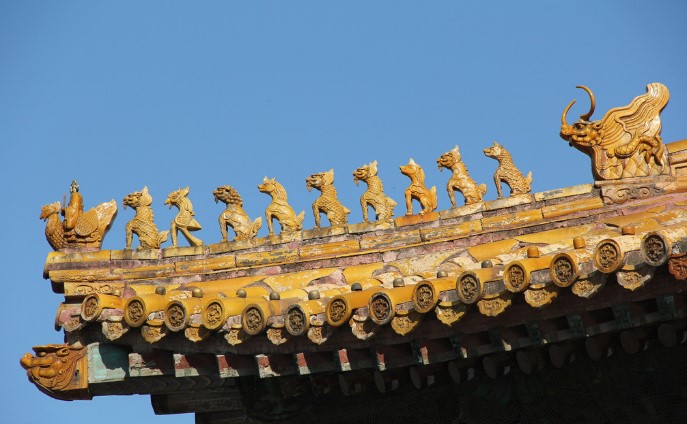 Did You Know? The little details on corners of the roofs in the Forbidden City are mythical animals.  The number of animals at these corners indicates the superiority of those who are sheltered beneath.  There are a total of 10 animals at each angle of the roofs on the building occupied by the Emperor: the Emperor on a phoenix, followed by a lion, horse, sea horse, dragon lion, dragon, dragon fish, unicorn, bull and a monkey.

We were then privileged to be invited into a private home in one of Beijing’s remaining Hutongs.  The same family has lived in this home for 600 years.  When the Mongolians (Yuan Dynasty) did break through the Great Wall and occupy China, in Beijing they built the Hutongs.

The community shared bathhouses and toilets located in these lanes/alleys. These are still shared by residents today as many of the Hutongs are without modern bathroom facilities. Hutong local shops sell all kinds of goods to community residents.

In the past, Beijing was composed of hundreds of courtyards around the Forbidden City.  Lanes and alleys are stretched in all four directions, connecting the different courtyards in the city.   It’s thought that in 1949 there were as many as 3,250.  But with the passage of time, and the requirement for city construction, the number has fallen dramatically. In 2003, only 1,500 were left, and now no more than 1,000 remain. They attract more tourists from home and abroad than the high-rise buildings and large mansions.

Protecting these historic residential areas and the families that have lived for centuries in Hutong communities is an urgent problem.  The family we visited were living in a very small four-room home around a tiny courtyard and proudly intent to stay put – for another 600 years. 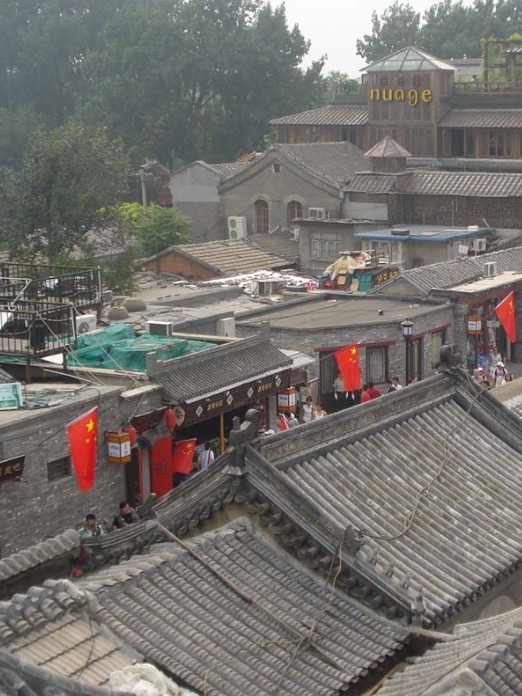 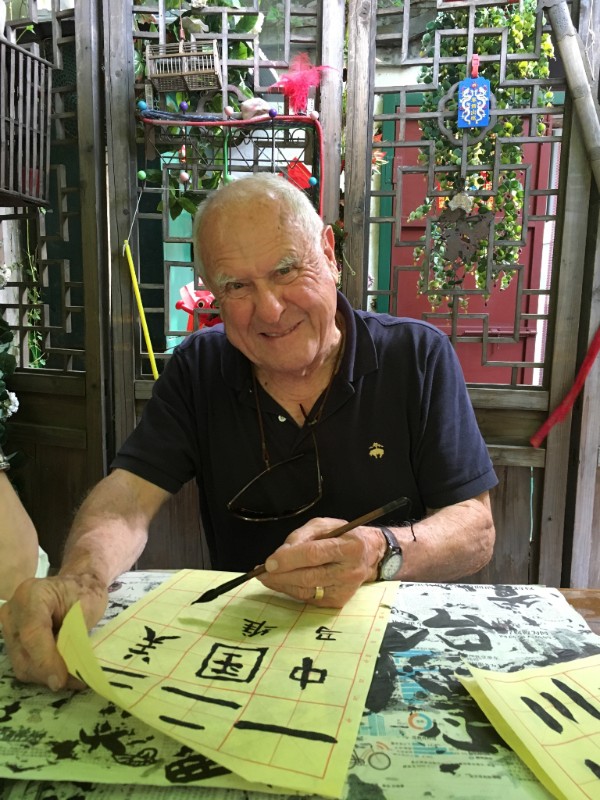 Did You Know? In China, just before the cultural revolution, you were considered a good prospect for a husband if you owned a watch, radio, sewing machine and a bicycle. 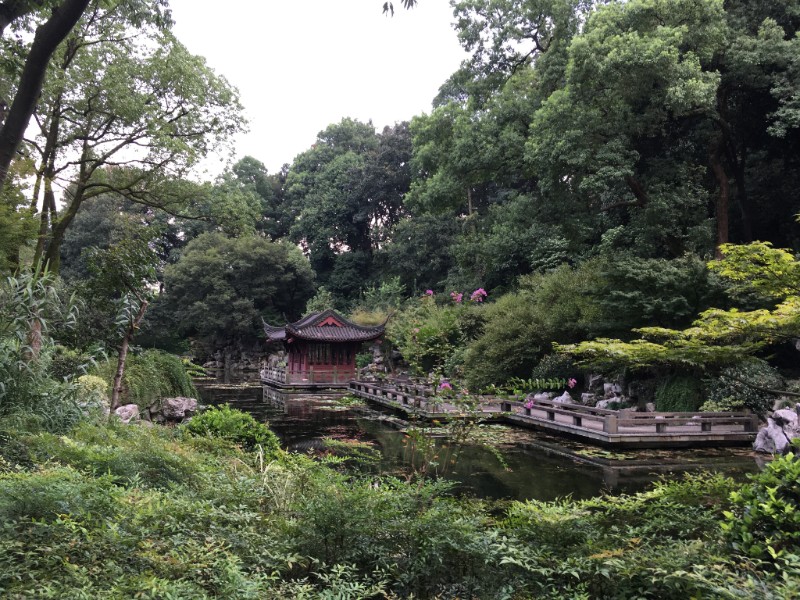 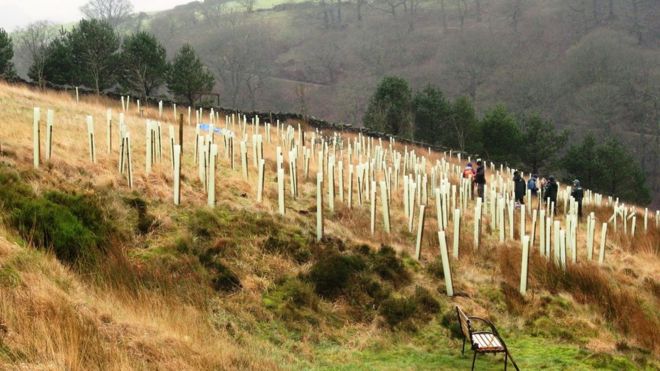 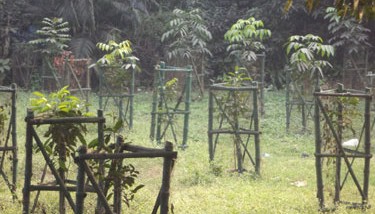 But despite the early focus of our trip on human structures, what we began to notice is how green and lush it is throughout China, with dense rows of trees planted everywhere – along the highways and all around the buildings.  We learned since 1978, China has planted over 66 billion trees – yes that’s billion.  This gigantic planting activity ranged from its arid northern territories, hoping to transform its sandy steppes, yellow dunes, and cities and towns leading up to the 2008 Olympics, held in Beijing and surrounding communities.

In January 2018, China announced plans to plant new forests covering 14 million acres, an area about the size of Ireland, with another 66 billion trees.  It is one of the latest initiatives to establish China as a world leader in environmental protection.  The next month, the government reassigned 60,000 soldiers to plant the trees in an effort to fight pollution by increasing the country’s forest coverage.

When we were first invited to China, one of our hosts suggested that we keep in mind that beginning in in 1949, China underwent a revolution that lasted 30 years. During those decades China experienced rampant industrial expansion to catch up with the rest of the world. During this development China created cities and infrastructure, while exponentially growing its population at a break-neck rate.  As a result, the country blighted its skies with chronic air pollution, and devastated its ecosystems with development and damage to its natural resources such as the Yangtze River.

Realizing the risks of continuing this detrimental trend, China declared a “war on pollution,” making significant commitments to reduce and reverse environmental damage throughout the country.  Forest expansion, cleaning up polluted rivers, and cracking down on those who break environmental rules have become top priorities.  (For example, new forest areas are being built in Hubei province, the Tibetan Plateau, and Inner Mongolia—all areas where we visited during our 3 weeks in China.) There is now an unprecedented level of cooperation between government and social capital, as well. 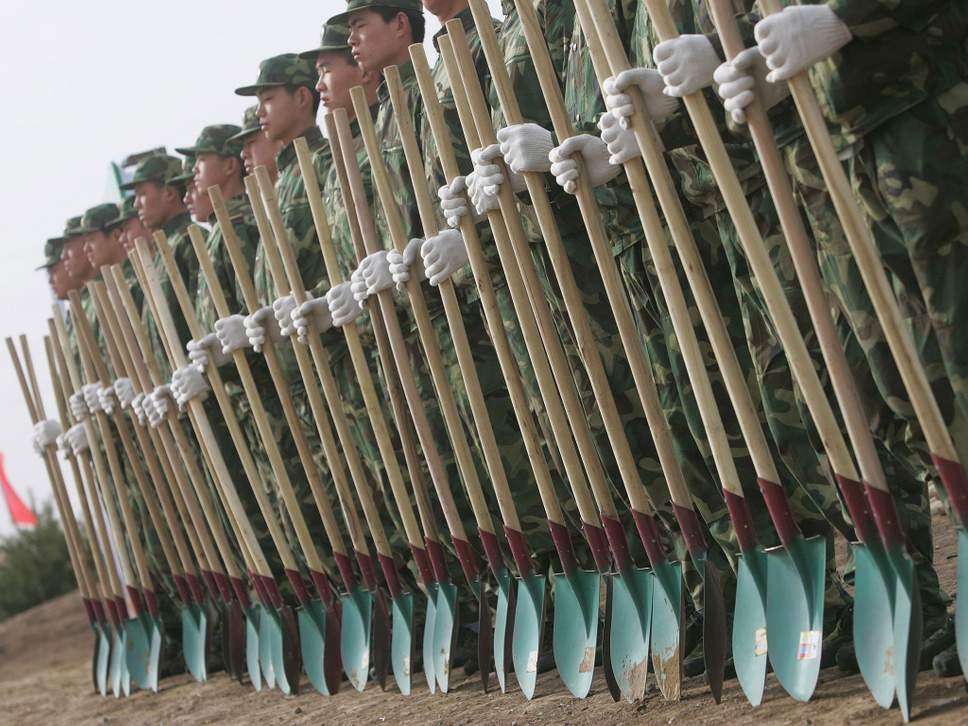 The Chinese government reassigned 60,000 soldiers to plant the trees in an effort to fight pollution by increasing the country’s forest coverage. 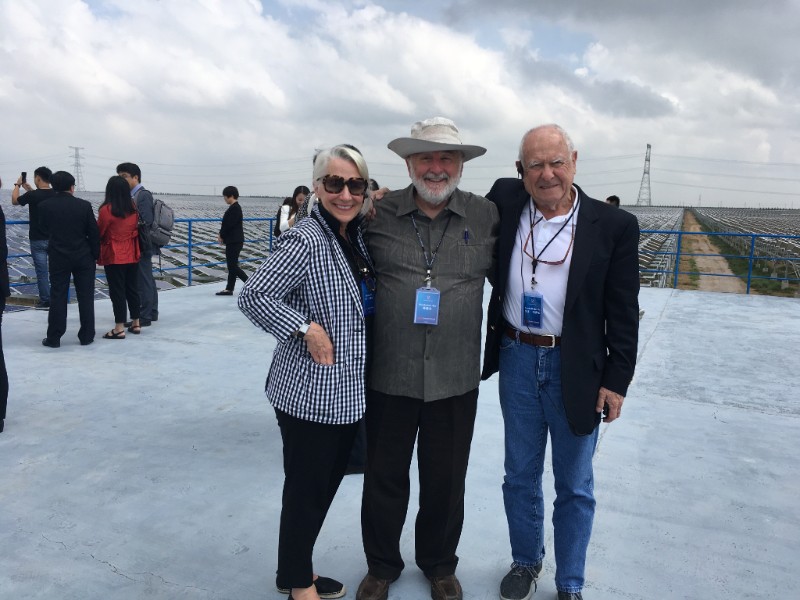 This was part One of our Four Part Series: Restore the Earth Dispatches from China.